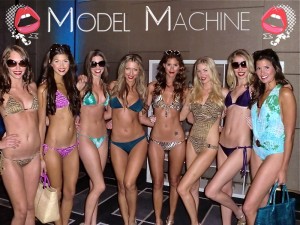 Take the biggest names in baseball, the most stunning NYC event models, and Jay-Z’s world-famous sports club, and what do you get? The hottest event of the entire summer. On July 15th, the 4th annual Marucci All-Star State of Mind came to Manhattan’s 40/40 Club to celebrate the brand’s extraordinary rise to the top of the baseball world. There were plenty of stars on hand, like David Ortiz, Andrew McCutcheon, and even Miss Universe Olivia Culpo, but that’s not what people were buzzing about. It was the sultry, sporty NYC event models from Model Machine, as they brought some extra sizzle to this classic mid-summer bash.

For decades, one brand produced the vast majority of bats used by Major League Baseball players: Louisville Slugger. The bats were sleek, simple, iconic. But were they optimized for performance? Back in 2002, Jack Marucci, a trainer at LSU, asked himself that very question. And he asked actual baseball players, too. The answers inspired him to found his own bat company, and eleven years later, Marucci Sports is used by more all-stars than any other bat in the game. And we’re not just talking Ortiz and McCutcheon, but Jose Bautista, David Wright, and Albert Pujols, among others. In fact, the players who use Marucci bats believe in it so much that many of them have actually bought into the company, something unheard-of for other brands.

So when Marucci, a brand inspired and supported by stars, started planning their VIP All-Star bash, you know they would settle for nothing but the best. That’s why they hired the finest NYC event models from Model Machine, the nation’s premier talent and modeling agency.

BEAUTY TO MATCH THE BRAND

Just like Marucci, Model Machine has shot to the top of their industry in just a few short years. And if you need an explanation for how they did it, just take a look at their stunning NYC event models on display at 40/40. These models weren’t just gorgeous, they were brimming with charisma and personality, too. They posed for pictures with fans and mingled with VIPs, all while embodying the excellence of the Marucci brand. It’s this combination of world-class beauty and down-to-earth charm that has made Model Machine’s NYC event models the hottest ticket in the industry.

THE SHOW GOES ON

The next night, the All-Star Game went on at Citi Field in Queens, but for anybody at 40/40 Monday night, the real event in NYC was the Marucci All-Star State of Mind party. Hot, exclusive, and totally glamorous, it brought together two brands at the top of their respective games: Marucci Sports and Model Machine.

Let’s just hope we see more of this in the years to come.